@School
@Home
Blog
About Us
Let's Talk
Resources
Blog
Thought Leadership
Partner Stories
Press
In the News
Press Releases
Learner Agency
Unlocking Education That Puts Learners First
by
Jessica Vannasdall
When a teacher shifts from a teacher-centered classroom to a learner-centered classroom, the potential for failure is great, but the opportunity for student success grows exponentially.
To receive your copy of this resource, please fill out the form below.
Thank you! Enjoy your resource:
Unlocking Education That Puts Learners First
Download 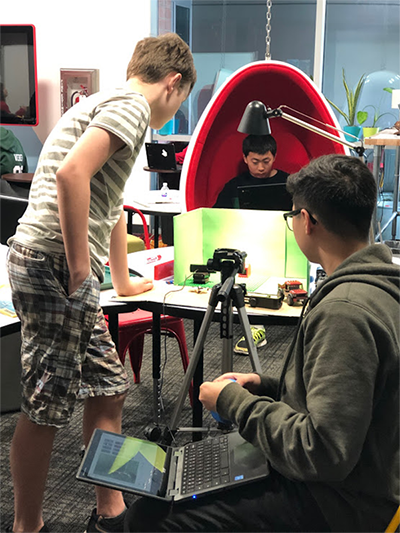 During my second year of teaching, a curious parent approached me one day after school.

“What branch of the military were you in?” she inquired.
“I wasn’t in the military. Why do you ask?” I replied.
“Oh, I thought you were because of the way you run your classroom.”

This wasn’t an insult to the military—or even to me. She was referring to the way things were neat, organized, and structured. The way I ran my class made it very difficult for my students to appear anything but successful. Bulletin boards were “Pinteresty” by 1998 standards, rules and procedures were clearly listed and frequently referenced, and standards were written on the board before that was a thing. There were rewards for following expectations and consequences for not. The classroom centered around me, and my need for order.

I had the children’s interests at heart, but like paint by number, I would prescribe each movement, activity, worksheet and project, step-by-step. To this day, extremely scaffolded education works for many teachers, students, and parents. The “release of control” method of showing an end product, modeling how to reach that product, following up with guided practice, and finally allowing students to work independently is a tried and true method of instruction. However, it also implies that there is one right way of achieving a goal.

Read more about how to create learner-centered systems.

I spent most of my early years instructing in this way with positive results. Over time, I experimented with methods such as choice menus, flexible seating, and independent study, but I was still a very large part of the equation—I “suggested” which items on the menu were appropriate. I created multitudes of alternate math and spelling activities, but it was still about me and what I thought the students should spend their time doing.

When my district began discussions about going 1:1 with Chromebooks I took it as an opportunity to reflect on my instructional methods. Attending one of the very first Chromebook conferences helped solidify this decision. A conference speaker detailed Google’s philosophy of 20 percent time—free time where workers are encouraged to explore alternate passion projects during the work week. Innovations like Gmail were a result of this “free” time. In a classroom setting, 20 percent time, also known as Genius Hour or Passion Projects, allows students an unstructured period of time to explore a passion, learn a skill, or answer a self-selected question. It made sense to me as an educator and a person; I would have loved this opportunity in my youth.

The possible benefits of student agency, voice, and choice piqued my interest, but the logistics of giving students control of a portion of the school day sent shivers down my control-freak spine. However, an hour a week for the possibility of increased student engagement and renewed interest in learning seemed like a risk worth taking.

When I began Genius Hour, I didn’t know what I was going to do from one week to the next, which was very scary. But not having a unit plan forced me to talk to students, listen to their questions, and make instructional decisions in the moment, which made me feel out of control yet energized. The students soon embraced the freedom. After two short weeks, our classroom was a frenzy of material flying, balls bouncing, music playing, and children excitedly chatting about what they were working on. They created ComicCon costumes out of cardboard, learned the art of Chinese lettering, perfected basketball trick shots, and upcycled clothing.

By the end of 16 weeks, students who never engaged in class had completed projects and were talking confidently about their process. Families who hadn't been involved in their child’s learning were creating together. A parent of a former student Jennifer Jackson told me, “Genius Hour gave my son the most opportunity to explore his interests. When his teacher gave him the control to work on a project of his own interest he excelled in all of his classes, because he learned to be responsible and work at a pace that suited him.”

Since experiencing the success voice and choice can give in the classroom, I’ve attempted to add more of this to my everyday teaching. Last year, I noticed that there were varying skill and interest levels when exploring our history units. Through the Altitude Learning Platform I was able to offer differing levels of scaffolding to prepare students for the final activity—holding a socratic seminar as a summative experience—and track their performance throughout. Several of my students were extremely interested in history and had little need for direct instruction. They self-selected the opportunity to hold a mini-seminar to demonstrate their understanding of the unit’s essential question, used primary sources as their reading material, and co-created a rubric. They benefited from the autonomy of working independently on work suited to their instructional level and interest, and I was freed up to spend more time with students who needed to develop skills other students already had. The students who worked independently commented that this was one of their most memorable units of the year—and the entire class benefited from listening to and questioning them during their seminar.

Teaching like this was uncomfortable for me in the beginning because I have long felt an imagined burden that I had to expose all students to identical content. My partners at Altitude Learning and my amazing team of reflective colleagues helped me realize that “covering it” doesn’t teach it. I’d now rather send my students to the next grade as thinkers, decision makers, problem solvers and questioners able to work collaboratively to use content in new ways. With the constant reminder of “What are you doing for students that they could be doing for themselves?” echoing in my mind, I hope to continue my practice of letting go in order for my students to gain. Leading a learner-centered classroom has proven to be less of a gamble and more of a necessity to prepare my students for the world they will live in. In the future, when I see my former students, I hope they remember me as “coach” rather than “sergeant.”

Learn more about how Altitude Learning can help you unlock learner-centered education.