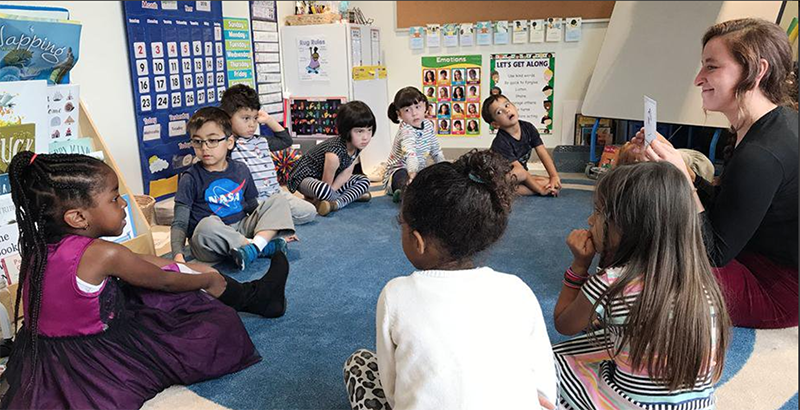 The education startup AltSchool, founded in 2013 by two Silicon Valley alumni, announced Friday that it’s breaking from the chain of four private microschools it operates in the Bay Area and New York City. The schools are known for their tiny class sizes and emphasis on “student-centered learning,” which tailors curriculum to each individual student’s academic and social-emotional needs. Parents from these schools pushed for the transition in management after convening with the company.

AltSchool will rebrand as Altitude Learning this fall and will focus on distributing its education software product that is based on — and was tested in — these experimental schools. The company has also developed a two-year-old “partner network” — currently with 42 schools and districts across the U.S. — to share tools and professional development on student-centered learning. Almost every school in the network subscribes to the AltSchool software.

Devin Vodicka, chief impact officer at AltSchool (and soon, Altitude Learning) and former superintendent of the Vista Unified School District in California, hopes the transition will help the company focus on spreading its platform.

“The approach to the development of the software has been to use input from students and from educators,” he said. “Now that we have two years of partnering with schools that we are not operating under our belt, we are very confident we can continue to leverage that same approach throughout this partnership network and the lab schools themselves.”

The lab schools will now be run by Higher Ground, a Montessori school management group based in California. They will continue to participate in the partner network.

The original founders of AltSchool, former Google employee Max Ventilla and tech consultant Bharat Mediratta, will move to positions on Altitude’s board. Joining Vodicka at the head of Altitude as its incoming president is Ben Kornell, former director of the performance-based assessment nonprofit Envision Learning Partners and a former administrator and teacher in Bay Area public schools.

The company’s roots in Silicon Valley go beyond staffing. By 2017, AltSchool had raised more than $173 million from funders, including the Chan Zuckerberg Initiative and the Thiel Foundation.

The AltSchool software has been praised by some of the company’s partners for transforming student-first teaching methods. Joe Erpelding, the principal of Design39Campus, a 1,200-student public K-8 school in San Diego, has been using AltSchool’s platform for a year in fourth and fifth grades and plans to extend it to sixth grade next year. The partner network was appealing to him because of the ongoing support it offers — something that’s not always guaranteed with groups hawking education software, he said.

“If you look at it as a vendor, I’m typically going to go buy … 5 bucks a kid or 10 bucks a kid but it comes with zero culture change,” said Erpelding.

In addition to helping launch the AltSchool Software, the partner network also trains schools on professional learning to help teachers adapt to a student-centered approach. Five schools within the network haven’t yet subscribed to the software but are still using the teacher training resources.

The AltSchool partner schools are in 12 states, mostly in California and New York City, with others scattered throughout the country from Alaska to the Terrell Independent School District in Texas. Just over half of these schools are private, while 15 are traditional public schools and another three are charters, which are publicly funded but independently operated. Altogether, the network includes more than 300,000 students. Vodicka said he was encouraged by the rising proportion of public schools in the network.

Erpelding also noted the impact on special education students in particular, especially those with Individualized Education Programs, plans developed for students with special needs. IEPs are typically assembled by professionals and teachers without student input, especially with younger students. But using one of the tools within the AltSchool software, he said, students can set their own social and emotional objectives.

Not everyone has been such a fan of AltSchool. The company has received pushback in the past, especially for how it has managed its lab schools. Critics have viewed these schools, and their students, as “guinea pigs” for AltSchool as it tested its software product. In past years, the company has shuttered five of its schools.
‍

AltSchool co-founder Ventilla has said in the past that these schools could be temporary and acknowledges that they were in part used for research and development. Vodicka confirmed that the company has learned valuable lessons from working in the lab schools. One example: Students are expected to record their work via photo or video and upload it into the AltSchool software. Little kids had trouble taking clear pictures, however, so the company developed a tool that requires both hands to take the photo.

Vodicka acknowledged that concerns over the future of these schools helped steer AltSchool to the current management transition. The company approached parents of these schools and assembled a steering committee, which ultimately requested moving to new operators.

“I think the net result is very positive,” he said. “We’ve learned that there is an entire community of practice and that we can be a part of that movement in a different way than we imagined at the initial stages of AltSchool.”

Critics have also pointed out that AltSchool’s software, at $100 to $150 per student annually, was prohibitively expensive for districts. The company has since changed the pricing model to reflect the two services (professional development and software product) it offers. Prices now vary, said Maggie Quale, communications officer and director of public relations for AltSchool.

But Vodicka said the company is “well-positioned for sustainability” and looking at new ways to expand the partner network. He and his colleagues are still taking feedback from the field about what makes for a sustainable price. Collaboration, he said, will be key to building a strong future for Altitude Learning.

“That’s really our goal,” he said. “The best way to do that is partnering with others that are committed to similar success.”